On April 2nd 2017  the Fraser Valley Heritage Railway Directors and members hosted the announcement of a total of $7.6 million funding for more than 220 projects in 150 communities in B.C. | Canada 150 grants throughout B.C. by (from centre left) Stephanie Cadieux, Marvin Hunt, Gord Macdonald, Chair of Heritage BC and Catherine Ouilette, Board Director of the BC Museums Association.

As Master of ceremonies,  Marvin Hunt, MLA for Surrey Panorama,  introduced Stephanie Cadieux, MLA for Surrey-Cloverdale, announced the grant on behalf of Minister of Community, Sport and Cultural Development Peter Fassbender.   She then presented the Minister’s comments  concerning the FVHRS.

I would also like to extend a very big thank you to our hosts, the Fraser Valley Heritage Railway Society, which operates as ‘Surrey’s Heritage Rail’ and particularly the society’s chair, John Sprung, who helped make this event possible.

I understand we also have a number of motormen trainees, here on a break, from their operators course this weekend. These are the people who crew these beautiful heritage cars – thank you for taking the time to join us today!

As part of today’s event, we’ll have the opportunity to ride the first car to be restored and put into service,  BCER 1225,. But first, we have some news to share about the car directly behind me, known as ‘the Connaught’.

Like many organizations in B.C., the Fraser Valley Heritage Railway is embarking on a special project in honour of Canada 150. Through the B.C. | Canada 150 program, the railway is receiving $50,000 for the restoration and rehabilitation of the Connaught car. Its name dates all the way back to 1912, when it was presented in royal livery for then-Governor General of Canada, Prince Arthur, the Duke of Connaught and third son of Queen Victoria. It was his official car for his tour of the Lower Mainland. The Connaught returns to service this year, with ceremony of course, on September 9,  to celebrate Canada’s 150th birthday. It is destined to be a large part of our history with its riders for years to come.

1304, is the only remaining “Chilliwack” car, out of the original fleet of fifteen.   Built in New Westminster, these cars were larger and faster than the 1200 series cars, and were designed expressly for the three-hour trip through the Fraser Valley. They even had a washroom onboard.

The Connaught provided service between Vancouver and Chilliwack from 1912 to 1950, when passenger service to the valley was terminated.  It was then reassigned to run, primarily, on the Burnaby Lake and New Westminster lines, until the entire interurban service gave way to buses in 1958.

I would like to recognize the countless volunteers who contribute their time and talents, day in and day out, to supporting the success of these organizations… just like the Fraser Valley Heritage Railway staff, motormen and conductors who are here today, and the 120 volunteers and 360 members who keep this place active and accessible year-round.

Another Cloverdale recipient of funding from the program was the BC Truck Museum. 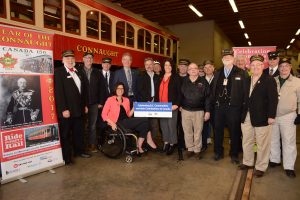