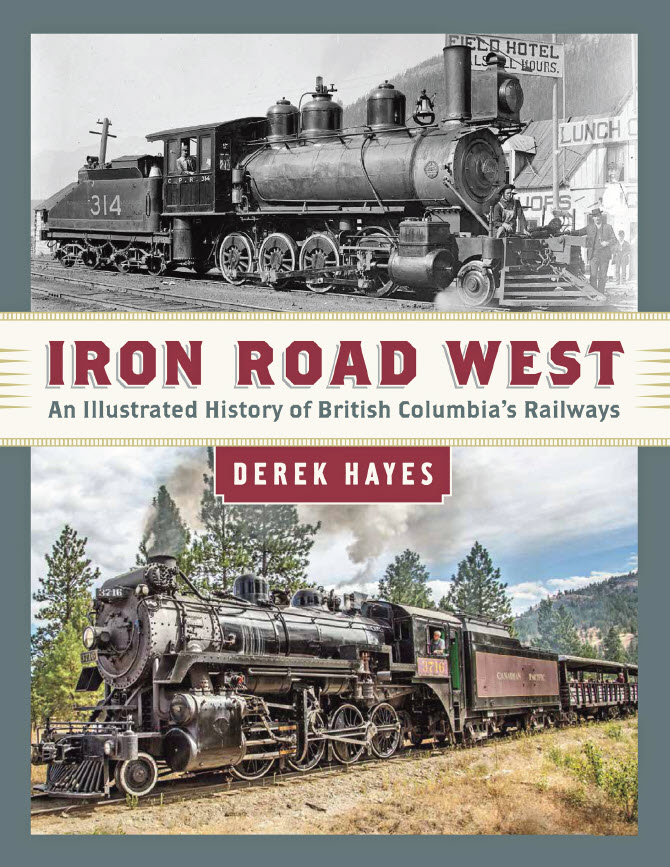 We will celebrate the launch of Derek’s newest book about the BC Railways, past and present. If you have read any of Derek’s previous 17 books, you know he is very fond of maps, railways, photography, and especially railway photography.

Derek will sign copies of Iron Road West after the presentation about his travels and the creation of the book. Refreshments provided in the Cloverdale Station. Proceeds of the sale of books at this event will support the ongoing efforts the Fraser Valley Heritage Railway Society and the operations of Surrey’s Heritage Rail.

Copies of Iron Road West will be available at the Cloverdale Station Book Launch November 16th only, at a 20% discount.

For more about Derek Hayes, and his previous books, please see his website.

“A popular and highly illustrated account of all of the railways of the province, from the coal mines of Nanaimo in the 1860s to Amtrak’s recent Chargers, and everything in between.
If you love trains, you’ll love this book!

Includes Canada’s only armoured train, Canada’s tiniest train, North America’s last logging railway, the Roberts Bank line and container and coal export terminals, lake steamers and railway barges, BCR electric, the first car to cross the Rockies—on rails, of course; the struggle for other railways to gain access to Vancouver after the CPR, Interurbans in the Fraser Valley and railcars in West Vancouver, the Coast-to-Kootenay railway saga, the building of all three transcontinental lines—and much, much more. With a special section on BC’s preserved railways, railway museums, and evidence of old railways still visible in the landscape—and how to trace the path of an old railway.

Includes the Fraser Valley Heritage Railway, plus the Interurbans in Richmond and Burnaby, and streetcars in Nelson. Packed with historical photos and with an appendix listing all of BC’s railway charters, built and unbuilt.